The BBC Hypes The 1970s and Youngsters Lap It Up!

The BBC series I Love The 1970s should really have been called I Love 1967 to 1982. Apparently reflecting the pop culture of each 70s year, the things we were "into", the series was often wildly inaccurate, pumping in pop culture from the adjacent decades. I Hype The 1970s would have been a better title. For instance, the Lava Lamp, released in 1964, was featured as a major 70s icon. The reality was that the thing was at the height of its popularity c. 1968/69. In the early 70s, the lamp became deeply naff - so naff Stan and Hilda Ogden in Coronation Street acquired one and proudly placed it on their serving hatch! There was something of a revival midway through the decade, in a post modern tongue-in-cheek style, as Mildred Roper acquired one in the ITV sitcom George & Mildred. But never was the Lava Lamp "cool and cutting edge" in the 70s.

CB radio was featured as THE craze of 1976. It wasn't legal, and not available in England. This American 1940s invention began to arrive here in any appreciable numbers c 1979. Illegal breakers rose steeply in numbers in 1980 and, after a mass rally in London, the date for the legalisation of CB radio was set for the 2nd of November 1981, with the American inventor of the gadget, Al Gross, making the first legal call from a Rolls Royce parked in Trafalgar Square. But the BBC vaunted it as THE craze of 1976. In reality there was simply some interest in the terminology and the beginnings of a campaign to get it legalised here because of a hit record and a couple of American films!

The Space Hopper was popular in the 70s, but had been so since 1968; the Stylophone was released in the late 1960s.

In addition, the I Love The 1970s series boldly stole from the 1980s. Of course, some 80s arrivals were invented in the 70s - time is a constant stream and this is how things are with all decades. But the Walkman (invented in 1979) did not arrive here until 1980 (as the Sony Stowaway) and there were several other items, some unnamed and unmanufactured until the 1980s, wrongly sparkling away as 1970s pop culture in I Love The 1970s.

I don't hate the 70s, but surely it's better not to live a lie about them? I have an uneasy feeling that many of today's youngsters have bought the hype and have a very unrealistic view of the recent past. The fact that they might try and live out a fictional 70s, rather than living in the current day, worries me. Virtual reality lives - a virtual 70s which really never existed in the first place. For some years now, I've been hoping to find a Tardis, bundle our 70s loving kids into it, and sentence them to a week in the real 1970s. I could imagine the shock - where are the hippies? Why are there no personal computers? Why have the lights gone out? NOT paste sandwiches again! etc etc. But at least, on their return, today would seem more attractive to them.

There are things that need doing, issues which the young should be addressing. Stuff the fictitious 70s and get on with it, I say!

In the 1990s it became fashionable to look at the 70s as a golden era. Young people began living in a decade rewritten and repackaged by cynical marketing types and the BBC. Non greedy! Non retro! Lovely - peace and love all around! Let's look at the reality. Starting with "non-retro" - because the 1980s was the first "retro" decade, wasn't it? In reality, the 1970s matched it pound for pound! The putrid orange and brown colour schemes and platform shoes/wedges were lifted from the 1930s, and disco glitter balls were so 1920s/30s/Come Dancing. 1940s boutiques were a wow.

The 1950s permeated the music and fashion of the 1970s like nobody's business. There were drainpipes and DAs and 50s chords could be heard in pop music from Abba to Punk and beyond. We adored Alvin Stardust, Wizzard, The Rubettes, Showaddywaddy, Elton John, Darts - all of whom had torn pages from the 1950s image and song book. There were many others. At the flicks, we watched That'll Be The Day and Grease. The Rocky Horror Picture Show was in the retro style of a 1950s "B" movie. On Telly, we adored that 50s retro style icon, The Fonz.

The 1970s also adored the 1960s... In the absence of new ideas, the hippie look continued - though if you were to suggest to the majority of housing estate youngsters back in the 70s that they were hippies, you'd probably get a thick lip. Later in the decade, we scanned back further into the 1960s for a Mods & Rockers and Ska revival. The 70s even put Juke Box Jury, The Avengers, The Saint and The Rag Trade back on the telly.

The 1970s went a bundle on programmes about the Second World War - like the doomly A Family At War and Danger UXB. Past recessions were relived (why? The 70s had its own recession!) in Sam, The Stars Look Down and When The Boat Comes In. We ate Upstairs, Downstairs with a big spoon - and thrilled to Royal abdication drama Edward and Mrs Simpson.

Older retro TV was hot with Poldark and The Onedin Line.

In fashion, Victorian style mutton chop sideburns, puffed sleeved blouses and long dresses and smock tops were much in evidence. We stuck fibre glass wood effect beams to our ceilings and adored electric retro aga style stoves and plastic beaten copper effect tables. I have more to write on the 1970s love of retro, but now it's time for a cuppa and a nice Curly Wurly.
Posted by maria at 11:28 pm 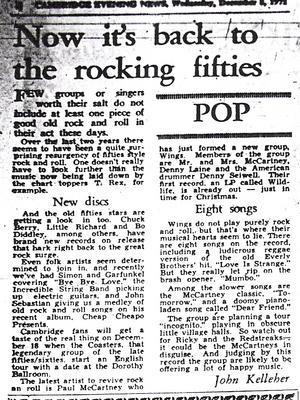 1970s fantasists believe that the 1970s were a hugely creative, non-retro time. If that's the case, there are fairies at the bottom of my garden. This article from a Cambridge newspaper of December 1971 also paints a different picture. Click on image for closer view.
Posted by maria at 11:10 pm

The aim of this blog is simply to paint a more realistic picture of the 70s, to point out to people that 1979 was not 1985 and remind people that NOW exists and doesn't need to be based quite so heavily on retro yearnings for an era that wasn't all it's cracked up to be.

Wouldn't it be better to create some genuine NOW pop culture for 2005?
Posted by maria at 11:05 pm

I remember last year reading about the "heyday" of Top of the Pops on ITV's Teletext service. It was said to be, of course, in the 1970s - "viewing figures of up to 19.4 million".

Good heavens - when?! I wondered. A quick check of the TV ratings showed that Teletext was right - TOTP had 19.4 million viewers on one occasion in October 1979.

When the ITV strike was on and viewers had no other option but to watch the BBC!

And as BBC2 was a minority interest channel, guess what BBC channel we were all watching?

Yes, top prize is yours, we were all watching BBC1, home of TOTP!

In fact, BBC1 was the only other option - there was no Channel Four and no Sky back then.

But Teletext didn't mention the strike. Perhaps the article's writer was too young to remember it? Or perhaps it simply didn't go with 70s hype mode?

So, that was the (entirely imaginary) Top of the Pops 1970s heyday. I contacted Teletext, who removed the "heyday" comment, but, it must be said, grudgingly!

Did any decade ever undergo such a lot of tweaking and lies to make it seem enjoyable in retrospect as the 1970s? Was it the same when we were celebrating the 1950s back in the 70s? I doubt it. In one of the online "Off the Telly" reviews - subject the BBC's I Love... series, the reviewer states that the 80s were "a less enjoyable decade". Now, I'm no 80s fan, but bear in mind that this reviewer had just sat through I Love The 1970s, which had contained at least five items of 1980s pop culture! Things unheard of in the 70s, or completely unavailable, sparkling away as fads of that decade.

The real 1970s were NOT a time of fast-moving fads. Pop culture moved much slower back then (look at the time we took to shake off the 1960s hippie look).

But people who weren't even there seem happy to believe the lies.

On the wonderful web (invented by Tim Berners Lee in 1989 - quick, change that!) 70s hype-ists are so "into" boosting the decade, that they are quite happy to misquote people. Andy Allen of Central Television spoke on a programme called Crossroads - 30 Years On in 1994. This show was dedicated to the old-but-fondly-remembered ITV soap opera, Crossroads (1964-1988), home to wonderful Meg Richardson (Noele Gordon), lovely Shughie McFee (Angus Lennie) and dear Valerie Pollard (Heather Chasen).

He certainly didn't say that in the broadcast, and there was no evidence of any editing.

Staying with the Crossroads Motel fan sites, it's worth noting information about Elaine Paige, who had a bit part in the King's Oak soap yonks ago. According to one fan site, she went on to great success in the musicals Cats and Chess "in the late 1970s".

Can all these boo boos really be genuine mistakes? Or is my theory of 70s hype correct?

I've been studying the phenomena for long enough to know the answer... and perhaps you are beginning to wonder...
Posted by maria at 5:35 am