The saga of "Year You Were Born" birthday cards listing the opening of Brighton Nudist Beach as 1979 due to the BBC's unclear information on the subject, continues. A new range of such cards came to my attention today: "1979: Brighton introduces Britain's first nudist beach", read the card for that year.

When contacted, the card company, as always, cited their source of information as the BBC's "On This Day" site. So, thank you to the horribly arrogant Alison Trowsdale for allowing this nonsense to continue.

In point of fact, Brighton Nudist Beach was "introduced" on 1st April 1980. It's simple to record, isn't it? Why can't the BBC simply commemorate the Beach's opening date - 1st April 1980 in it's "On This Day" section, rather than clouding the issue and confusing web-skimming researchers?

Read the background story to Alison Trowsdale, the BBC and On This Day Versus The Licence Payers (from March this year) here...
Posted by maria at 6:37 pm No comments:

It's ridiculous to see how the BBC with its flawed "On This Day Section" is still misleading web surfers. "Brighton Bares All" it declares on 9 August 1979. But that was only the day the beach was given the green light by the local council. It opened on 1 April 1980. "Brighton Bares All" is highly misleading - baring anything naughty on Brighton beach in 1979 was an offence!

I entered into long and wearisome correspondence with the BBC on this subject - surely it's far more usual to commemorate the opening date of any particular institution? But the BBC adores hyping the 1970s and hates the 1980s.

The BBC does not belong to the public. It is an arrogant, PC, biased organisation, with a bizarre 1970s fixation. And "journalists" like Alison Trowsdale should not be salaried by our licence fees, which we are FORCED to pay. After my correspondence with Ms Trowsdale, who was responsible for the article, she IGNORED me! Brighton was still "baring all" in 1979, according to her headline, when in fact it bared NOTHING!

And so it remains.

The BBC is being run by a clique.

And clear and accurate reporting matters not.

Apparently, Ms Trowsdale and a team of journalists trawled the BBC archives for news footage for their "ON THIS DAY" on-line features, found the April 1st Brighton Nudist Beach opening footage from 1980, but then decided to backdate it to the decision to give the beach the go-ahead the previous August because it fitted in better with Ms Trowsdale's bizarre view of the free-loving, free living '70s. She was absolutely loath to allow its opening in 1980 to take the headline. The reality simply did not agree with her view on how the 1980s should be represented.

Confusingly though, the news coverage accompanying the feature is not from 1979. It's not from the council meeting which made the decision. It's from the 1 April 1980 - the beach's opening day.

And so, from then on, various "Year You Were Born" birthday card manufacturers, TV and radio shows and web sites have been echoing the BBC - and Alison Trowsdale's - inaccurate information.

They go to "ON THIS DAY", they see a headline entitled "1979: BRIGHTON BARES ALL", they don't bother to read the small print blurb, they look at the beach's opening footage on the same page and they wrongly assume that it opened in 1979.

I really resent contributing to the salaries of the BBC's "journalistic staff" at times like this.

But I don't have a choice.

And yet what arrogant, inaccurate so-and-so's many of them are!

Rumour has it that the BBC is about to build a new complex to house its journalists' self importance. Complete with hi-tec Ego Massage. May I suggest "The Alison Trowsdale Brighton Bares All Wing" as the name?

History is continually being rewritten with a '70s slant and the latest item to be transformed is House music. Now, I don't particularly like House music, I prefer Disco, but the fact is that House music began to come into being in the early 1980s. It doesn't matter if punters at Frankie Knuckles's club, The Warehouse, were asking for the latest "house" records at their local record purveyor's shop, they were talking about Disco records played at The Warehouse. 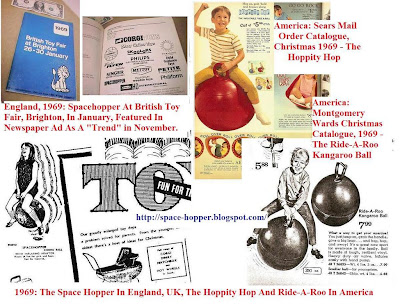 RetroWow is an interesting site, with some terrific insights. But, in my opinion, it falls down by occasionally relying on secondhand research and voicing highly subjective opinions.

We all know that the recent '70s revival was based on a heap of inaccuracies. '70s rewriting appears to have begun in the mid-1990s, and then to have blossomed ridiculously with the BBC's I Love The 1970s. Sadly, RetroWow appears to echo these errors at times. Not always though. There are times when RetroWow bucks the trend and gets something right, despite mass inaccurate reporting of the subject elsewhere. Take the space hopper - 1971 according to the BBC (later echoed by the Toy Retailers). 1968 and 1969 according to toy shop ads in UK newspaper archives. Refreshingly, RetroWow gets this fact right - placing the hopper, quite rightly, in 1968!

Flared trousers - 1970s, according to the BBC, Old Uncle Tom Cobbley and all. 1970s according to RetroWow. At least as early as 1969 according to fashion shop ads in UK newspaper archives.

And then there's the 1980s. Of course, the 1980s get a bad press - the scapegoat decade for all known ills. RetroWow does quite well in avoiding the instinctive priggish stance of '80s haters, but falls down when it comes to 1980s decor and fashion. There is absolutely no doubt that the 1980s plundered the past for fashion inspiration, just as the 1970s did and, to some degree, the 1960s. Even the original 1950s Teddy Boys were thus named for wearing Edwardian style suits.

But RetroWow mistakenly negates all 1980s fashion as past plundering (following the lead of the notoriously inaccurate Wikipedia?). But what about the shell suits? The bulldog hair grips? The strange lycra outfits? The distinctive colour schemes and patterns? The horrendously large shoulder pads? The jelly shoes? The leggings, pixie boots and ra ra skirts combinations? The deelyboppers? The bizarre hairstyles? Doorknocker earrings? The leg warmers fad? I could go on.

RetroWow slips up on shoulder pads. Originating in the 1940s, the massive beasts of the 1980s did not appear until midway through that decade. Study any '80s era American soap (Dallas in 1978/1979 had no evident pads and exhibited a curiously late 1960s flavour in fashion and decor - Lucy's orange flares being a case in point) and watch the pads appear and grow, reaching hideous proportions circa 1985. These are the fondly remembered (or otherwise) shoulder pads of the 1980s.

As far as we can see, the RetroWow shoulder pad misinformation originated with the good folk at Dallas, eager to claim credit for all things 1980s. But really it was Dynasty which led the '80s "pump up the shoulder pads" movement - as anybody studying early Dallas/Dynasty seasons would quickly discover.

RetroWow also claims that all '80s interior decorating was retro - but for those of us that remember the black ash/futuristic schemes, this seems absurd. Retro was highly prevalent. This trend first appeared around the late 1960s, as a desire to return to something that was not plastic and formica kicked in, and flourished in the Laura Ashley '70s.

But in the 1980s, retro interiors were not the whole story, far from it.

RetroWow also illogically states that the 1982 PhoenixPhone "screams 1970s"! What?! Its design echoed the 1960s trimphone which still seemed very modern and cutting edge even by the early 1980s. RetroWow is guilty of '70s hype. It is not good enough to say that Life On Mars used a 1982 Phoenix Phone so it must "Scream 1970s" - we all know the modern agenda to colour up the 1970s. Those of us there in the 1980s remember the new phone models released when BT was formed and began to sell phones for the very first time, and the explosion in colourful and interesting models then available. This is well reflected in TV series like Howards' Way.

UPDATE: One of the things which first interested me in RetroWow was the statement:

"Flares were derived from the hippy fashion for loon pants of the late 60s. ....."

Not accurate, of course. Flares were derived from the hippy fashion for flares in the late 60s.

But RetroWow has now updated its information.

The site is definitely worth a visit.
Posted by maria at 7:20 am No comments:

Life On Mars And Ashes To Ashes: Philip Glenister - Politically Correct Twit Who Doesn't Know His 70s From His '80s...'

Being a good middle class boy of a certain age and background, Philip Glenister, of Life On Mars and Ashes To Ashes, abhors the 1980s - his version of them - and adores the 1970s - which he apparently pretends were the 1960s.

He appears to be the type who imagines that any kind words about the 1980s will immediately label him a selfish, yuppie-type git. Perish the thought, Philip, dear, nobody could be more giving than you, I'm sure.

But when he decides to insult the 1980s, Mr G should at least get his facts straight. In this week's Radio Times, he burbles about the '80s being all brown and hessian in colour. No, dear, that was the '70s, as we all know.

The '80s were more nauseating neons and pastels.

What a wally Mr Glenister seems. He also tells us that his character, Gene Hunt, is very much a "seventies copper". Wrong again, dear. He's a parody of a '70s TV copper. That is all.

I shan't watch Ashes To Ashes 2, which moves to what is supposedly 1982 this season. The pop culture errors in the last series - and in Life On Mars - put me right off.

And Mr Glenister's priggish posturings don't endear me either.

I looked at the BFI Screen Online site with horror. For instance, did you know that Angels, the nursing saga of the mid 1970s to early 1980s, completed the evolution of British hospital soap? Yep, the daring political grittiness of Casualty counts for nothing. Angels was the same as Casualty, according to Anthony Clark of the BFI. This is despite TV critic Hilary Kingsley describing Casualty as being "aggressively different to Angels" and also as being akin to American 1980s hospital soap St Elsewhere. Casualty had us gasping. But Angels often had us yawning.

Angels started out as a boring but worthy series about fictional student nurses in 1975 - before developing into a slightly grittier soap opera format from 1979-1983. Angels, according to Anthony Clark, was when medical soap went "modern".

This statement does the 1980s Casualty era a grave injustice. Casualty pushed the penny much, much further.

Anthony Clark clearly does not know his subject.

Oh, but I can't read any more! The BFI claims its Screen Online guide is "definitive" - but it seems they must have got some of their information and opinions from the likes of Wikipedia. The BFI should hang its head in shame!
Posted by maria at 3:48 pm No comments: