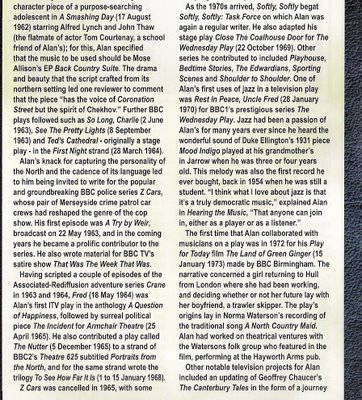 Andrew Pixley, apparently a "TV historian", is quite happy to hype the 1970s, as we all know.

In his work on the background to playwright Alan Plater, for Network DVD (who also hype the 70s to death), Mr Pixley claims that a one-off play in October 1969, The Coalhouse Door, was shown "as the 1970s arrived".

One is led to assume that the apparently drudgy 1960s were giving way to the apparently grand epoch that was the 1970s, and the 70s were somehow foreshadowed.

For the serious researcher, the 1970s are simply a set of numbers. The decade arrives at the beginning of 1970 and leaves at the end of 1979. That's it.

Many people see 1969 as the culmination of the events of the swinging 60s, not as the start of the financially restrictive 70s, but, whatever - that is of no consequence to the professional researcher. If a one-off play is shown in October 1969 the glory or otherwise may influence but does not belong to the following decade.

If Softly Softly became Softly Softly Taskforce in 1969, that's just when it should be reported as happening. There is no "70" in the digits 1969!

Shame that many "factual" writers allow a bizarre 70s fixation to get in the way of producing good, clear work.

I'm tired of reading inappropriate mentions of the 1970s from thumb-sucking geeks, most of whom barely remember the decade.

Andrew Pixley is a major embarrassment. Some of his research is good, but he is very much one of the new breed of self styled experts, complete with bizarre retro waistcoats, 1970s obsession, and an ego the size of Lancashire.

He has managed to contribute an awful lot to the mystifying glorification of the 1970s so much in vogue and a pile of fact-based misinformation, too. Read his work by all means, but do not take it to be definitive.