Here is part of a newspaper advertisement showing a girl on a space hopper... 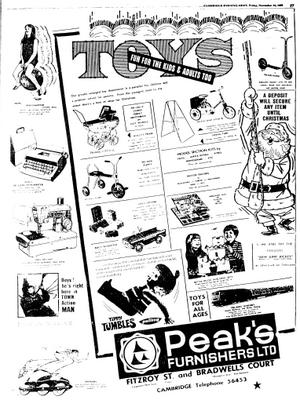 ... here is the whole advertisement... 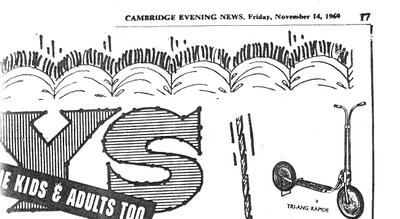 ... and here is the date - Nov 14th, 1969. For the I Love 1970s series, a small caption was inserted in the opening titles, stating that the space hopper was released in 1968 and then "bounced its way through the 70s". Fair enough, but the I Love... website states that the first spacehoppers arrived in this country in 1971. Would you like onions with your tripe?

The spacehopper was an instant hit, very popular from 1968 onwards. It was still going strong in the '70s, yes, but did it really deserve such major billing? Other sites follow the BBC's line, touting the hopper as either new in 1971 or as THE craze of 1971. Popular, yes. New or a sudden craze? Most certainly not.

Oddly enough, in the late 1990s, the Toy Retailers Association were listing: "Clackers, otherwise known as Klik Klaks" as the "overwhelming toy mania of 1971".

That information is accurate. So, why hype the spacehopper out of the 1960s and into the 1970s now?

I believe this muddling of facts is due to the BBC having an agenda to hype the 70s in the I love 1970s series.

There is also the fact that people who were children in the 1970s are often pulling the strings now, and the Internet provides a tremendous opportunity for the spreading of untruths and building up or knocking down of various eras. When you consider that the World Wide Web was only invented in 1989, and Internet use has blossomed incredibly since then, you can see the difficulties. Anybody can publish anything on the Web - and, as well as great sites, there are many which tell untruths for their own ends.

Many people invest much time in hyping the 70s - those who want to feel good about their youth, and those young geeks and nerds who do not remember the 70s, but have no present and enjoy "living" in a nice, safe fantasy past.

It is sad and silly.

But the spacehopper did not arrive in this country in 1971, or indeed in the 1970s at all.

And that's a fact.