Ace of Wands: Network DVD Talking Rot About The 70s... 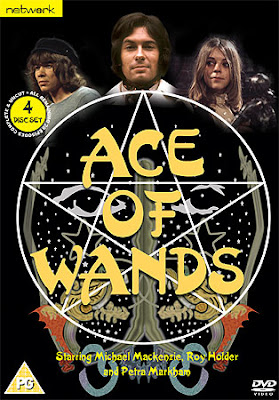 Our old friend Andrew Pixley was involved in writing a booklet to accompany the DVD. Hmm. Wonder if he wrote the above blurb as well?

Andrew Pixley has been in touch and did NOT write the blurb for the Ace of Wands DVD on the Network site. Thanks for that, Andrew. I wasn't sure anyway, but apologies for dragging your name in!
Posted by maria at 4:07 pm 1 comment:

Ant And Dec And Their 1980s Childhoods - Transferred To The 1970s By Bryan Appleyard, Times Online

One of the strangest and most obvious 70s-hyping articles I have ever seen has just fallen into my delighted mits. It concerns the two young TV celebrities Anthony McPartlin and Declan Donnelly, Ant and Dec to their audience.

Both these lads were born in late 1975 but, according to Bryan Appleyard, Times writer, they were watching TV as soon as they were born and had a 1970s childhood watching "1970s heroes" like Bruce Forsyth on The Generation Game (actually, Brucie had been a TV favourite since the 1960s) and Terry Wogan (who was far more on screen in the 1980s).

The Generation Game with Mr Forsyth as host ended in 1977. When Ant and Dec were two years old.

In their 1970s childhoods, they watched the smart funny guys in suits – Bruce Forsyth, Des O’Connor, Terry Wogan and, of course, Morecambe and Wise. These were the old MC types, still linked to the music hall rather than rock’n’roll. And those were the days of three channels, when the big shows were national events with colossal ratings. Above all, there was the Saturday-night ritual of the big show like Forsyth’s The Generation Game when the family gathered round, just as they did the next day for roast dinner. These were the long-forgotten days of TV as socially cohesive good.

Surely, the days of multi-channel TV really started in 1989 when British Sky Broadcasting began? But Mr Appleyard hasn't finished yet:

Simple really. What you see is what you get, and what you get is Ant and Dec. But actually, there is something more. There is the 1970s. It’s no accident that Life on Mars, the greatest British TV drama series for some years, was nostalgic for the tough certainties of that decade. It was the last gasp of an old conception of modernity before our own multi-channelled, hyper-connected, broadbanded, globalised, virtualised, terrorist-infested reality took over.

In the 1970s people could still think they were “a people” and gather round their televisions on Saturday night and feel everybody else was watching the big show. It was that moment of popular belonging that produced Ant and Dec. And it is nostalgia for belonging that keeps them at the top. Ant and Dec are – is – the two-in-one, the bringing together.

No terrorism? In the 1970s? Please, what an ignorant and tasteless comment! And people were gathered around their sets not having much choice of what to watch in the 1950s, 1960s and 1980s, too. Life certainly didn't rev into modern day overdrive in the 1980s.

And is the current day really so dreadful?

But television introduced them to new possibilities. Their parents’ generation may have felt the same about cinema, but the big difference was the intimacy. Glamour and colour – colour TV began on BBC2 in 1967 – really came into the living room in the 1970s. This was not, like the movies, a distant dream. This was recognisably British, usually working-class people, doing wonderful things… and being loved for it.

But surely Ant and Dec wouldn't be taking much of it in until the 1980s, and as colour was introduced in the 1960s, Mr Appleyard's desperation to hype the 70s shines through and becomes blindingly obvious. We rented a colour TV set in 1978 and I was thrilled. But I was twenty-years-old. I remember it. And I still don't number "colour" as a 70s "thing". I know it preceded the 70s. Ant and Dec were only fully into TV in the 1980s. They would surely take colour for granted?

On with Mr Appleyard's article:

But the naughtiness has to be there, it is an aspect of their legacy. When they were doing children’s shows, they had the anarchic Tiswas – the show that made Chris Tarrant – to look back on and, from 1992 on The Big Breakfast, Chris Evans was doing his brilliant deconstructions of TV convention. The new style was to be naughty, not only with the audience, but also with the crew, the cameramen, anybody who happened to pass by. We all know it’s TV, was the message, so let’s play TV. The pretences of professionalism were to be replaced by the professionalisation of play. It was taking on this tradition that made Ant and Dec different from their 1970s heroes. But they never took it as far as Evans. If Evans was John Lennon, Ant and Dec were definitely Paul McCartney, or perhaps, more accurately, Cilla Black. They were the ones who made the revolution nice – nice enough for Edna in Wigan and Beryl in Birkenhead.

Firstly Tiswas. Ant and Dec would be six or seven when it ended. In 1982. And when did their ITV region first take the show? Secondly, "1970s heroes". Lennon and McCartney? 1960s icons. Cilla Black? Ditto.

Where does Bryan Appleyard get his 70s fixation from? Perhaps it's partly from Ant and Dec - for their generation, the 70s have been hyped beyond belief. But that cannot be the whole story. The article simply doesn't make sense, it's sloppy and childish, illustrating the illogical fixation of its writer with a decade already hyped out of all recognition.

The 1970s did not really come into the equation when it came to what Ant and Dec viewed, and what society in general viewed, when they were children - it was merely the decade the two lads were born in.

I don't always agree with you, but on this occasion you are right: the writer of this article falls over himself to go on about the 70s. And yeah, it's inappropriate. I was born in 1965. I had a 1970s childhood. My only 60s memories are vague, foggy, disjointed and few, dating back to when I was about four. Ant and Dec's memories of the 70s must be similar as they were born ten years later than me.

The article is potty. Brucie and co were not even distinctively 70s performers - they were traditional entertainers, and seemed kind of timeless in the 70s and 80s.

Good point you're making. Keep it up. A virtual 70s rewrite I can do without. Quit fawning over that grotty ten years and talking a load of cr*p, Mr Appleyard!
-
UPDATE 2

The boys are plainly a bit daft to allow this, but Bryan Appleyard must have an ego the size of a house to stuff his fixation down our throats at the expense of logic. Don't they have editors at the Times?

I was born in February 1975, so I'm older than Ant & Dec. I didn't really pick up on '70s telly, just pre-schooler stuff - "Bod", things like that. I also remember being sick in my uncle's slipper after mixing cheese and onion crisps with Polos. But not much else.

Apparently "John, Brighton" was born in the same year and remembers all the programmes and the repeats! And yet Brucie left the Generation Game when John was about two! Dude saw the repeats on UK Gold in the 1990s if truth be known. And Appleyard wasn't talking about repeats - he was waxing nonsense about the social cohesiveness of the 1970s. When Britain was "a people". BARF!
Posted by maria at 4:00 pm