More Proof That The Spacehopper Was Being Distributed By Mettoy In The UK In The Late 1960s...

An advertisement from the "Cambridge Evening News", England, November 1969.

Now, you already know what I think of the BBC's 1970s rewriting exercises. And particularly regarding things like the spacehopper - released in the UK around 1968, but according to the Beeb in "1971":

Space Hoppers - also known as Hoppity Hops, Hop Ball, and Kangaroo Balls - bounced into the UK during the Summer of ’71 and served absolutely no useful purpose whatsoever.

Below is pictured some details from a British Toy Fair brochure from January 1969 - and amongst other jolly things attending was the SPACEHOPPER! 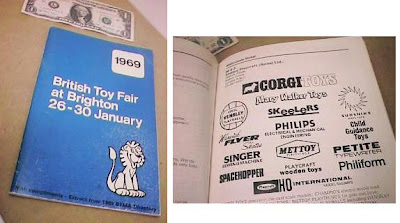 The British Toy Fair At Brighton, 26-30 January 1969 - and (left) a page from the brochure. Mettoy was the original Space hopper distributor. Below the word "Mettoy" on the brochure page, to the left, you'll see that the spacehopper itself was present at the show.

Meanwhile, back in our own world of pathetic 70s hype, the BBC's lies about the spacehopper have infected the Toy Retailers Association and just about everything else.

And so we exalt in the radiant light of another (false) 70s-debuting object.

Why don't I simply tell the Beeb? I've tried. I even tried to get a researcher to come and look through my local newspaper archive at some of the evidence. But nobody can be bothered. And meanwhile our licence fee goes towards the BBC leaving false information mothballed online.